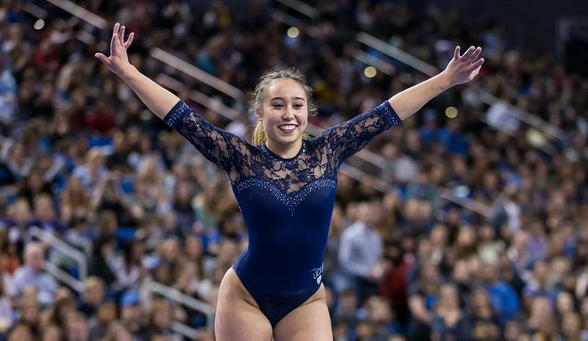 If you take a scroll through the #gymnastics tag on Instagram, you are sure to come across at least one video featuring 21-year old UCLA student-athlete-turned-viral-sensation, Katelyn Ohashi.

But that’s nothing compared to the views she’s racking up with her recent perfect 10 floor routine at a meet on Jan. 13.

UCLA Gymnastics posted the routine to their Twitter account with the caption “A ? isn’t enough for this floor routine by @katelyn_ohashi. ? .”

The socialsphere seems to agree as it has more than 38 million views and 160,000 shares on Twitter alone.

The clip isn’t resonating with people just because of Ohashi’s skill, but also because of the joy she oozes when she competes. Just try to watch the clip without smiling.

And if one of the most popular comedians spoofing your routine isn’t enough to bring more joy, then what about Ryan Seacrest hooking you up with the casting director of Dancing with the Stars? Yup, that happened on his radio show on Wednesday.

. @RyanSeacrest connected viral @uclagymnastics @katelyn_ohashi with @DancingABC producer and casting guru Deena Katz after Katelyn revealed her dream is to be on the hit dancing competition show. Find out what happened here! https://t.co/6xnMDnp3PR pic.twitter.com/v3K4m93OsU

The next Simone Biles?

Though the talent is evident, we probably won’t be seeing Ohashi in Tokyo for the 2020 Olympics.

While the Seattle, Wash. native had Olympic hopes in 2015, she was not happy. So she took a step back from international competition to concentrate on the collegiate level. Her journey is detailed in a video piece on The Player’s Tribune entitled “I was Broken”, where she cites the reason for the change as a desire to find “joy, my voice, myself and my love for this sport.”

So far, it seems to be working.