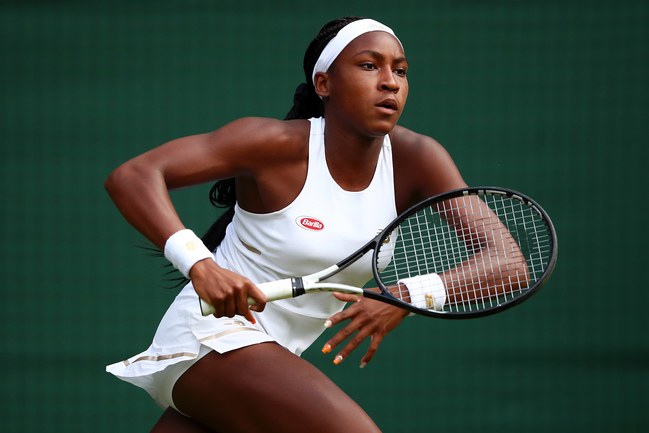 Roger Federer has urged the WTA to consider relaxing their rules surrounding young players competing at professional tournaments following the success of 15-year-old Cori Gauff. The teenager, who also goes by the nickname ?Coco?, announced herself at Wimbledon by beating Venus Williams in straight sets and then saw off grass-court specialist Magdalena Rybarikova in similarly emphatic fashion. However, despite her breakout performances, Gauff can only play in five more pro events before she turns 16 next March, in eight months? time, with WTA rules only allowing players to compete in 10 professional tournaments in their 15th year.

Coco?s exceptional talent and excellent results, winning the French Open juniors, earned her an additional two pro events to compete at. The ruling, implemented in 1994, is designed to shield younger players from the mental and physical tolls of competing professionally, which has led to chronic injuries and premature retirements, while Jennifer Capriati notably struggled away from the court after making the top 10 aged just 14.

But Gauff?s father and coach, Corey, believes the ruling is dated and puts too much pressure on youngsters to perform in their rare professional outings, and Federer ? whose Team8 agency represents Coco ? agrees. He told reporters: ?I understand the rule completely that they want the young players not to play too much. I?ve told the WTA they should loosen up the rules. I loved seeing [Martina] Hingis doing what she did at a young age. This is not me being involved in any shape or form as Team8 through Coco. I try to give her as much advice as I can through Team8.

?I think it would be nice, you know, if they could play more. I feel like it puts in some ways extra pressure on them every tournament they play. It?s like their week, this is now where I finally am allowed to play, I have to do well, right? I?m not sure if it?s maybe to some extent counterproductive. ?They could maybe do a mentoring system that there is maybe still a rule about how many tournaments they?re allowed to play, but maybe it should be more, in my opinion. Then the mentors should come in, the legends like Billie Jean or Chris Evert, Navratilova, others, maybe speak to the parents, the coaches, the player for that matter, and really, like, educate them so they don?t fizzle out.

?Maybe your best time is from 14 to 20 for some reason ? it?s not like for everybody else from 20 to 30. So in a way you take away that opportunity, you know. Some want to have kids maybe at 24. At least you had a strong career for 10 years, from 14 to 24. I don?t know. ?It?s up to debate. I don?t have the perfect solution. I see why they did it, because we?ve had the history of some tough parents out there. But at the same time you?re also increasing the pressure for that player each week to produce.? Next up, Gauff faces world No.60 Polona Hercog on Centre Court on Friday ? her youngest opponent yet at just 28 years old.