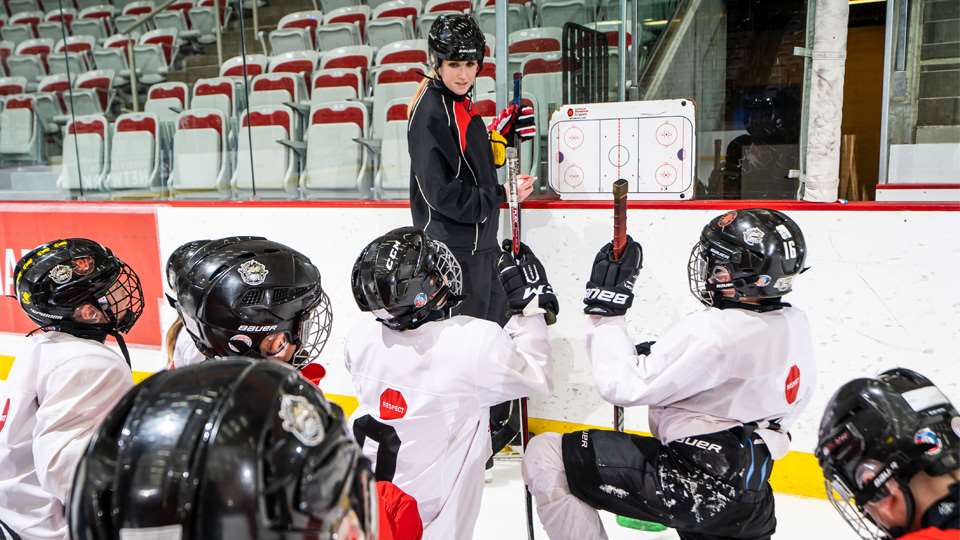 Great coaching has the potential to inspire an athlete to participate in sports for life. It is in that spirit Hockey Canada has established the Women Master Coach Developer (WCMD) program, an initiative equipping 30 female coaching leaders with the training to develop more female coaches from coast to coast to coast.

?We believe emphasizing and providing female-led instruction will create engaging and welcoming training experiences, remove barriers to coaching education for women and develop female role models and leaders within the hockey community,? Teal Gove, manager of hockey development at Hockey Canada, says. ?By dramatically increasing the number of women in meaningful coaching roles, we will create the infrastructure needed to support the participation of girls and women in hockey.?

The delegates selected for the WCMD program, which kickstarted in July, are currently completing courses that impart knowledge on facilitating coaching programs, evaluating coaches, keeping girls in sport, making ethical decisions as a coach and what it means to be a master coach developer.

?It?s dialling in on girls and what motivates them,? she says. ?It is showing research about why girls participate and how to keep girls going as there some interesting differences between them and boys.?

Each one of the women in the program received the contact information for the 29 other ladies undertaking the journey. Linda Massie, the head coach of Hockey Newfoundland and Labrador?s female under-16 team, is intending on taking full advantage of the engagement component of the WCMD program.

?There are some pretty amazing individuals taking this program. I look forward to speaking with them and learning from them as well.?

While a significant portion of course content is delivered via interactive webinars, the 30 delegates will also complete some in-person sessions before the completion of the program. The coaches may also choose to complete the online modules together.

Each of the coaching leaders will be required to collaborate with their member branch to deliver a We Are Coaches women-in-coaching training program in their province or territory at the end of the program to receive WCMD certification.

Taryn Baumgardt, the female hockey coordinator for Hockey Alberta, says the We Are Coaches capstone project will be an empowering experience.

?It will be an opportunity to empower female coaches and leaders in the game. Hopefully it will help grow the number of coaches as providing young female athletes with role models to look up to in the sport will be huge.?

Fort Smith, N.W.T., product Jessica Cox, the lone delegate from Canada?s northern territories, has already delivered coaching clinics and participated in a We Are Coaches program out of a desire to grow the pool of female coaching talent in the Northwest Territories and Nunavut.

Cox expresses that Hockey Canada is helping her work towards fulfilling this objective through the program.

?This kind of programming speaks to the fact that the organization recognizes the importance of developing coaches across the board, the impact those coaches can have at the grassroots level all the way up to the high-performance level and that good coaching is fundamental to good coaching programs.?