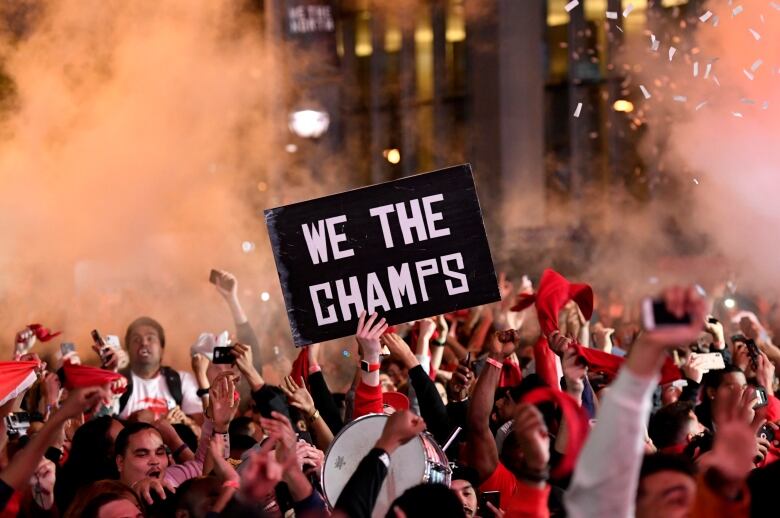 The Toronto Raptors are bringing the Larry O’Brien Trophy as NBA champions home to Canada, a brilliant basketball story 24 years in the making.

Kyle Lowry had 26 points, nine assists and seven rebounds to lift the Raptors to a thrilling 114-110 victory over the two-time defending champion Golden State Warriors on Thursday in Game 6 of the NBA Finals.

Raptors in six. Or 6ix. A storybook ending.

Pascal Siakam added 26 points, while Fred VanVleet had 12 of his 22 points in the fourth quarter. Kawhi Leonard finished with 22, and Serge Ibaka chipped in with 15.

Klay Thompson had 30 points for the Warriors, who had won three of the past four NBA championships. Andre Iguodala added 22, while Stephen Curry finished with 21.

In what will go down as one of the most exciting games in recent Finals history, Lowry, playing with the sprained left thumb he suffered in Game 7 of the conference semis 12 games earlier, got the Raptors going, staking his team to an early nine-point lead in a thoroughly entertaining first half of breakneck basketball. Three days after connecting on just eight three-pointers in Game 5, the Raptors had nine from deep by the end of the first half Thursday.

Both Lowry and Leonard ran into foul trouble in the third quarter, picking up their fourth fouls. A three-pointer by Andre Iguodala with a minute left in the third put the Warriors up by five ? their biggest lead to that point ? and ignited the rowdy crowd. Golden State led 88-86 with one quarter to play.

VanVleet had three big three-pointers in the second half: his first tied the game, his second gave Toronto a one-point lead with 7:08 to play, and his third put Toronto up 104-101 with 3:44 to play. VanVleet, looking battered with a bandage under the eye he cut a couple of games earlier, clenched his fists and let out a jubilant yell after the final one.

A Lowry basket made it a six-point Raptors lead with 2:14 to play. But a three-pointer by Draymond Green sparked a Warriors run capped by a DeMarcus Cousins layup that slashed Toronto’s lead to a point with 38 seconds left.

On Toronto’s second-last possession, Leonard was swarmed by Warriors as he finally got a pass off to Danny Green. But Siakam fumbled Green’s pass and it went out of bounds, giving the ball back to Golden State with 9.6 seconds to play. Curry’s three-pointer bounced off the rim, then the Raptors regained possession with 0.9 seconds left after a mad scramble.

Leonard scored on a technical awarded because the Warriors called a timeout when they didn’t have one to take. He connected for two more to clinch Toronto the victory.

After 82 regular-season games, and 24 post-season battles, all leading to this moment, finally the Raptors could celebrate.

The Raptors had been methodically working since president Masai Ujiri, dreaming of an NBA title, acquired Leonard last summer, and then added Marc Gasol at February’s trade deadline. Leonard has been their emotional gauge, his teammates assuming his mantra of living in the moment. Never too high, never too low.

“This is a strong-minded tough-ass group of guys,” said Raptors coach Nick Nurse, almost a year to the day he was promoted to head coach after the firing of Dwane Casey.

The Raptors’ post-season run had seen Toronto trail Orlando 1-0, Philadelphia 2-1, and Milwaukee 2-0. But the level-headed Raptors never allowed doubt to creep in.

The Raptors had missed an opportunity to close out the Finals at home on Monday, losing to the Warriors 106-105 on a night marred by Kevin Durant’s torn Achilles tendon. The Warriors vowed to win for Durant, and when highlights of the 10-time all-star were played on the Jumbotron, the arena erupted in chants of “K-D!”

The already short-handed Warriors lost Thompson in the third quarter Thursday after his left leg buckled underneath him when he came down from a dunk. The Warriors’ sharp-shooter was on the ground for several minutes, returned to the game briefly to sink two free throws ? Danny Green was whistled for a foul on the play ? before heading to the Warriors’ locker-room. He was on crutches soon after.

The Raptors had already won all three previous games ? each by double digits ? at Oracle this season, including two wins last week in a storied building that Raptors fans have practically turned into their own Jurassic Park ? O-Town version.

The Raptors’ historic run to the Finals gave the NBA something new, a fan base that extended beyond the boundaries of just one city, but stretched across an entire country. There’s been a groundswell of support from the Maritimes to Vancouver Island.

Thousands of fans gathered at Jurassic Park outside Scotiabank Arena ? like they’ve done all post-season long ? and cheered on the Raptors under dark skies and drizzling rain, ponchos pulled up over dripping hair. There were versions of Jurassic Park viewing parties across Canada, including Montreal, which was lovingly dubbed “Jurassic Peel,” and at Mosaic Stadium in Regina, normally home to the Saskatchewan Roughriders.

The pockets of Raptors fans in Oracle Arena could be heard singing along with Canadian singer/songwriter Sarah McLachlan to “O Canada.” Train’s lead singer Pat Monahan performed the U.S. anthem.

Win or lose, it was bound to be an emotional night for the Warriors, who say goodbye to Oracle Arena, their home since 1967 and a storied building that has seen plenty of glorious victories, before moving across the bay to sparking new Chase Center in San Francisco next season.

“This is sort of a once in a career moment where you play in a building for the very last time,” said Warriors coach Steve Kerr. “Win or lose, we’ll be able to share some emotion and say our goodbyes. But it is a strange, unique night.”

Lowry scored the Raptors’ first 11 points to propel the Raptors to a quick nine-point lead. An 18-10 run gave the Warriors a brief lead late in the first quarter, and the Raptors led 33-32 to start the second.

Golden State led by two points several times in the second quarter, but the Raptors responded to every Warriors push, and ended the half with a 7-3 run to take a 60-57 advantage into the halftime break.