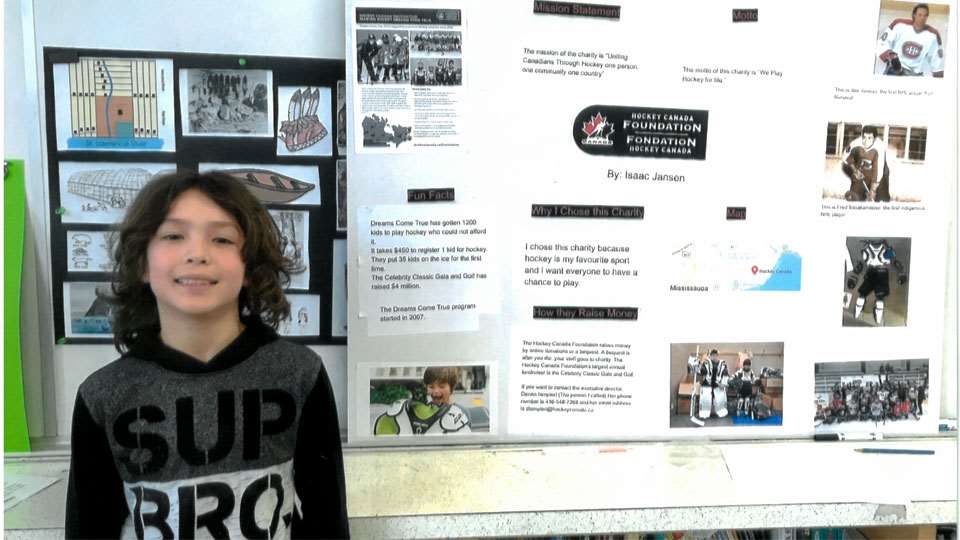 Just 10 years old, Isaac Jansen is building awareness of the Hockey Canada Foundation and its mission to inspire a lifelong love of the game

Isaac Jansen shares the same dream as many young boys and girls growing up in Canada: He wants to play professional hockey.

His passion to realize his own goals is admirable, but what is particularly remarkable about the 10-year-old is that he cares deeply about other kids getting the chance to chase the same dream.

A project Isaac completed for one of his Grade 5 classes at John Wanless Junior Public School this school year powerfully illustrates his deep sense of empathy.

La Chin Yu charged her 27 pupils to research a charity and create a multimedia presentation about that chosen cause. The assignment was a collaboration between the school and Toronto-based school program Project Give Back.

Isaac selected the Hockey Canada Foundation (HCF) as the subject of his presentation.

?Hockey is my favourite sport,? Isaac says. ?I found out that a lot of people can?t afford to play hockey and I wanted to help those people.?

He vigorously began the work of learning more about the not-for-profit that strives to preserve, nurture and strengthen the bond between Canadians and their favourite game.

He created a poster that outlined the most interesting facts he uncovered and put together a 10-question trivia game ? this interactive component of the assignment is called a ?FUNraiser? ? using PowerPoint. For every correct answer a classmate would provide to a question about the HCF, Isaac would click the space bar and a different piece of hockey equipment would appear on a hockey player.

Isaac says the most interesting fact that he learned about the HCF is that its Gala & Golf event has raised more than $6.7 million since 2009 to fund projects that grow the game from coast to coast to coast.

In a written speech that he presented to his classmates, Isaac shared that he was also taken by the HCF motto, ?We play hockey for life.? He says in his speech that he admired that the HCF ?doesn?t just get kids to play for one season. They get them to love hockey and want to play for their whole life.?

His presentation underscored that the foundation?s Dreams Come True program has given more than 1,300 kids an on-ice experience. The program also supports the young athletes by providing equipment and helping to cover registration costs.

Isaac?s presentation turned out to be a big hit with his class, and with his school at large during a gallery event in May.

?I really liked the background and history that Isaac shared during the presentation,? says Yu. ?It was fascinating for all the students.?

She knew Isaac would deliver a strong presentation because ?he is caring, conscientious about his work and very empathetic.?

Working alongside Isaac on his exhibition was his mom Carmine, who appreciated an opportunity to bond with her son.

?I am absolutely proud and grateful for the opportunity to have gone through this experience with him,? says Carmine. ?Project Give Back and the Hockey Canada Foundation allowed Isaac to learn that hockey is more than kids on the ice playing a sport ? it brings Canada together as a nation through our united love of hockey.?

Hockey Canada Foundation executives became aware of Isaac?s project after he penned a letter thanking the organization for the difference it is making in society. The formal letter to the HCF was the final component of the assignment.

His letter and presentation proved to be so touching that he was invited to meet with Donna Iampieri, the executive director of the Hockey Canada Foundation.

?We talked about the foundation, Project Give Back and me as a hockey player,? Isaac says. ?It was nice.?

Doug Goss, chair of the Hockey Canada Foundation Board of Directors, is impressed with Isaac?s efforts to bring greater awareness to the HCF.

?It was exciting to learn more about Isaac?s project,? Goss says. ?His presentation shows he deeply appreciates the Hockey Canada Foundation?s mission to enable the growth of hockey in Canada and to inspire Canadians to play the game for life.?

Isaac hopes his project spurs more people to learn about the HCF.

For more on the Hockey Canada Foundation, exploring the many different giving options or making a gift to Canadian hockey, visit?HockeyCanada.ca/Foundation?or contact?[email protected].